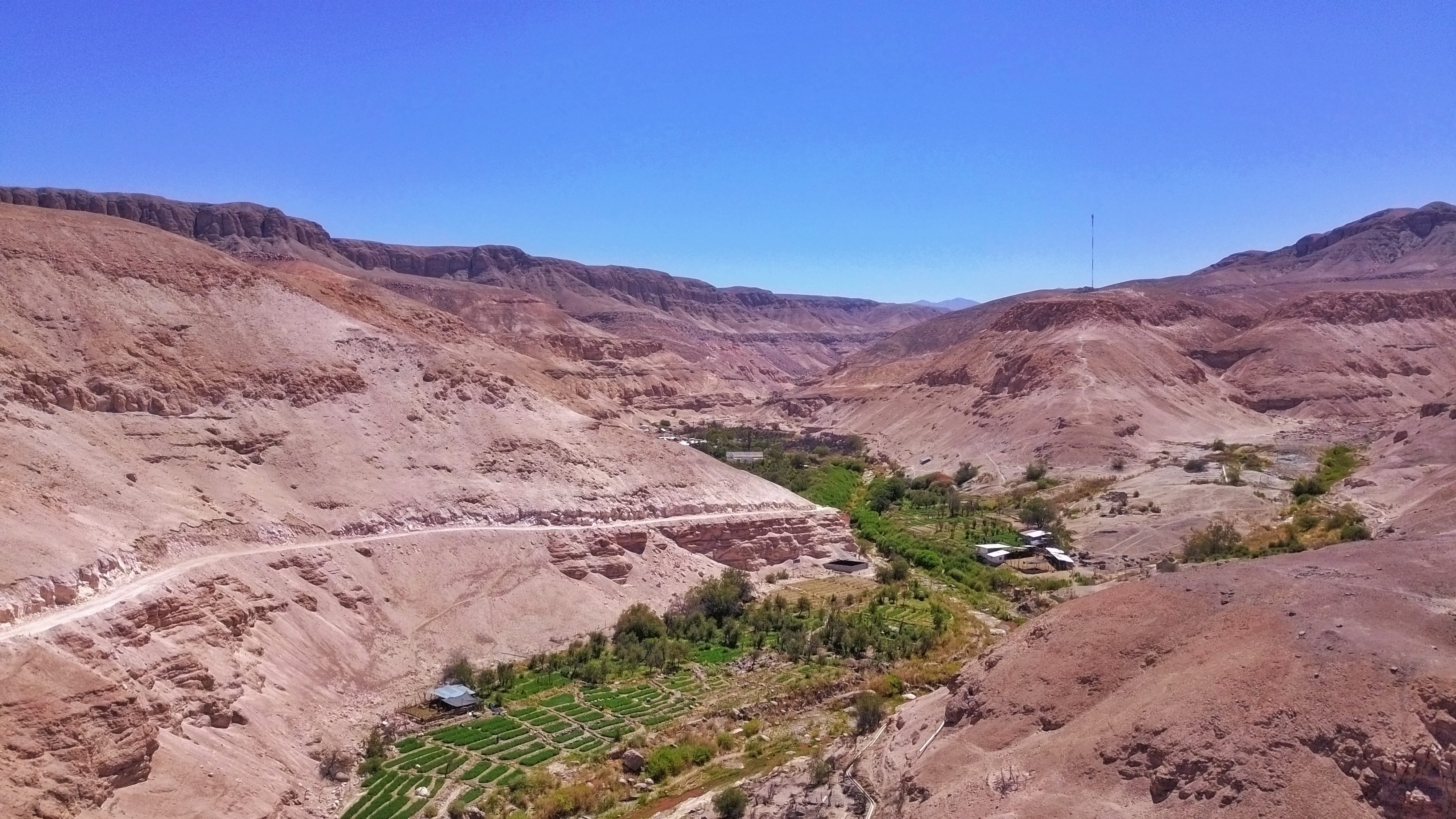 From the orographic point of view, the Tarapacá Region presents different altitudinal floors, which provide an extraordinary range of landscapes distributed along a physiographic profile that reaches even 6,000 meters above sea level at its highest altitudes, and which descends to the west. until touching the shores of the Pacific Ocean. The indicated entities are classified due to their geomorphological and climatic characteristics, constituting themselves, in turn, by four physiographic strips summarized below.

There is a narrow coastal platform on which the city and regional capital of Iquique is located, adjacent to the Pacific Ocean, which up to the mouth of the Loa River presents notable widenings. Next, a Farellón Costero or Cordillera de la Costa rises abruptly along the internal edge of the previous Platform, with summits close to 1,500 meters above sea level and relatively lower passes between them, and which on the eastern slope towards the Pampa del Tamarugal is less abrupt, of lower height and uneven (Niemeyer, 1980).

However, elevated at about 1,000 meters above sea level, a sector of Pampa stands out, which from the Tana sector to Loa receives the name of Pampa del Tamarugal. It has an average width of 30 to 40 km, little slope and is considered a prelude to small quebradillas that are making their way through the Andean massif towards the foothills. Also called sierra, it is located in the eastern sector of the massif, characterized by an inclined plane that enjoys a certain regularity and that has a slope of between 5 and 10 degrees. This sector ends before an extensive plateau called the Altiplano, a sector adjacent to the Andes Mountains (Niemeyer, 1980).

The Quebrada de Huasquiña is located in a transition zone between the Intermediate Depression and the Precordillera, corresponding to a deep depression that furrows the central zone of the region in a northeast-southwest direction, with the presence of a large amount of vegetation that contrasts with the surrounding arid landscapes and the high amount of continental sedimentation (Niemeyer, 1980; DGA, 2010).

From the hydrographic point of view, the Huasquiña ravine is located within what is called the Tamarugal basin. Endorheic in nature, that is, its waters do not flow into the Pacific Ocean; It is in charge of balancing the intermediate depressed zone where the Pampa del Tamarugal is located. In turn, it is considered one of the largest basins in the national territory, with 220 km in a north-south direction and a width of 40 km in its central zone, covering a total of 8,800 km2 that go from the south of the Quebrada de Tiliviche to a little further north on the Loa River. Likewise, its geographical location is given by the coordinates 19º 16' and 21º 45' South; and 68º 42' and 70º 18' West.

Regarding its geology, in the Quebrada de Huasquiña outcrops of sedimentary and intrusive rocks and volcanic deposits of the lower Cretaceous-Jurassic Period stand out. In the area of ravines, the large amount of boulders and sediment that descend from east to west due to archaic water flows, closely linked to the evolution of the Andes Mountains (Niemeyer, 1980) is appreciable.

The Huasquiña sector, as well as its surrounding spaces, are characterized by presenting a domain of desert conditions (from the climatic point of view), marked by the subtropical position of the Tarapacá region and the influence of the Pacific anticyclone. In this way it is possible to find four varieties of climate in this region: Coastal desert climate, normal desert climate, high altitude steppe climate and marginal high altitude desert climate; being the one of normal character the one that attends to the orchard of the ravine.

The Quebrada de Huasquiña, although it receives rainfall sporadically, is almost nil, registering in specific years and does not exceed more than 10 mm per year. However, it is possible to find moments in which these values have fluctuated above normal, replicating the phenomenon in the headwaters of the basin, and from where the main water courses that allow agriculture and the maintenance of the populations of the valleys are irrigated.

However, the main macro-scale atmospheric behaviors that affect the region, and the localities contained within it, are assigned to the relationship between the South American Monsoon positioned in the Amazon sector and the Southern Oscillation (El Niño and La Niña Phenomenon). ) (Romero et al. 2017).